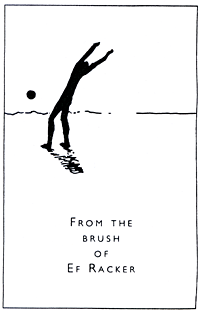 Efraim Racker (“Ef or Efi”) (1913-1991) started painting in Vienna when an aunt gave him an oil painting set in 1925 for his twelfth birthday. His high school art teacher, Viktor Loewenfeld, who later became a renowned expert in the relationship between psychology and art, guided him. Ef was influenced by expressionists and the Viennese secessionists especially Egon Schiele, who remained one of his favorite artists.

In 1932, Ef entered the prestigious Academy of Fine Arts Vienna [Akademie der Kuenste], but only stayed briefly rejecting the formality of training. Soon after, he entered the University of Vienna Medical School. He continued to paint and draw prolifically throughout his life.

When Ef died on September 9, 1991, he was preparing to take a leave from his laboratory at Cornell and his home art studio to attend his first retreat, the Djerassi Resident Artists Program in Woodside, CA.

While Ef pursued scientific research and art seriously, he was legendary for his humor. Until now, very few have had the opportunity to view these 79 art albums, which he assembled thematically, using his paintings, sketches, and drawings. They are by no means scrapbooks or doodles. The albums reflect his passion to experiment with mixed media. Some of these albums represent satirical comments on his surroundings not shown in his full sized paintings. 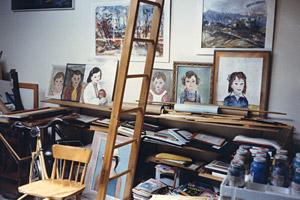 Ef used many of the smaller paintings and sketches (2x4," 3x5," 7x10," 8x10") from these albums to create hundreds of full size paintings (6"x 21", 36" x 27" and larger). Most of the paintings, which he sold for student scholarships or gave to friends and family, are landscapes and seascapes. There are some portraits of friends, relatives, fellow scientists and of children. Most albums and individual paintings and drawings within them have titles, primarily in English.

There are 79 albums: Ef presented most of the albums to his wife “Anzi” for their wedding anniversary on August 24 or for her birthday on April 26. Several albums are dated December 24 and were prepared for family members as Holiday presents. However, there are several exceptions: 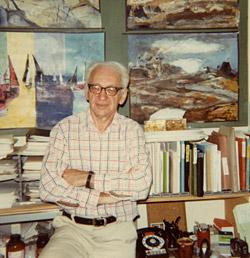 Ef painted and sketched as he moved from lab to lab,often under adverse circumstances. He did create two home studios.

Ithaca photographer Jon Reis digitally photographed the albums as raw files in 2012. The digitized photographs of the albums are now preserved in the Efraim Racker Collection as part of the Cornell University Library Rare and Manuscript Collections.

Some of the albums are now quite fragile. Most of these album covers are inexpensive plastic binders, scrapbooks and photo albums which he bound with nuts and bolts, aluminum rings, string and small leather belts. He mounted his artwork in the albums on construction paper, card stock, graph paper, photo album sticky pages, and Cornell stationary.